Categories
Market News
The outlook for global toy licensing through 2020

A smartphone in every home

One of the key reasons that licensing will be the market driver of growth within traditional toys and games is the strong connection that children will form with their licenses. In 2015, over 1.2 billion smartphones were sold globally and nearly half of every household had access to a smartphone.  Global sales are not expected to decline anytime soon, with 32% growth expected by 2020, where it is expected that over 70% of global households will possess a smartphone.

Many of these phones will inevitably end up in the hands of children, and with continued advancements in expansion in mobile data networks, will mean that children can potentially have constant access to the internet. This will allow them to view their favourite media content at any point of the day and interact with the intellectual properties they enjoy through streaming videos, and mobile games.  Increasing interaction means a deeper connection with licensed characters resulting in higher demand for products featuring these characters, in particular toys.

In addition to the growth of smartphones, households of the future should be better able to purchase licensed products than ever before. Licensed toys typically carry a higher unit price than their non-licensed counterparts due to the added cost of fees paid to the licensor. Therefore licensed toy growth is strongly linked to income growth, especially in developing markets where there is a greater amount of price sensitivity.

Global gross incomes per households are expected to grow by 7% in constant value from 2015 to 2020. While these gains will not be even across income levels, many families will see higher income levels over the next five years. At the same time, the average number of children per household has been on a steady decline over the past few years due to the growing number of women entering the work force globally and delaying their first child birth.

Overall the average number of children per household is expected to shrink 4% overall from 2015 to 2020. This means families will have higher incomes but fewer children to spend their income on, which in turn means they will be more inclined to buy higher priced licensed toys.

With such a large number of smartphones in the hands of children as well as higher household incomes, the ability to connect with and buy licensed toys will be greater than ever. The choices in licensed content will also reach new heights. Each year currently promises to be full of numerous big budget potential blockbusters that can greatly drive interest in their respective licensed characters.

Every year we can expect one new entry in the Star Wars franchise, as well as a sustained stream of new Marvel, DC, Harry Potter, Pixar, Transformer, and other films. And in some instances the properties promise possible story or trilogy ending instalments to their franchises, such as Avengers: Infinity War or Star Wars Episode IX.

Added to this are the supplemental television cartoons, mobile game apps, and other online video content based on the properties, like Star Wars Rebels. This ultimately means that children will be subjected to an immense variety of media content and major properties will need to invest more to compete for their increasingly strained attentions.

The combination of smartphone proliferation, richer and smaller households, and a dizzying amount of media content will create a strong atmosphere for licensed properties. That will likely be even further bolstered by new developments like immersive virtual or augmented reality experiences. The growth of licensed toys will not go unnoticed, and more manufacturers and retailers will grow their portion of licensed products.

This positive atmosphere will likely drive more licensors to enter the toy market which in turn will further fuel licensed toy growth, creating a feedback loop that sustains year-on-year sales increases. While such a cycle cannot last forever due to eventual market maturity, through to 2020 there is every indication that the outlook for licensed toys will be bright.

This article is originally published on Spielwarenmesse 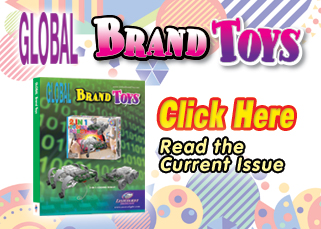